As many of you know, I like to put Disney with things that you don't normally think it belongs with- such as Nascar. Turns out, I'm not the only person who does this!
Brad Conway is a police officer with a love of Disney. While this isn't unusual, it's how he expresses this love that is different: he writes haiku. (Note: haiku is a form of Japanese poetry usually written in three lines. The first and third line have five syllables, while the middle line has seven syllables.) In fact, Brad has written a whole book of haiku poems dedicated to Disney. The title of the book is, fittingly, Mouse of Zen. There are 351 haiku in this first edition (the second edition is already well under way). 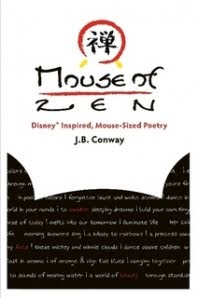 Cover design copyright J.B. Conway and Knell Studio Works
While reading the book, there were several poems that made me just stop in my tracks. For example, this haiku utterly and completely sums up my feelings about Disney World
a place heaven sent
day or night, rain or sunshine
world that never sleeps
And having just returned from a very hot and humid summer visit to Disney World, I find this one very appropriate:

over coffee and pastry

Every person with a love of Disney, be it Disney World, Disneyland, or Walt Disney himself, will find something in this book that speaks to them. Also, even when the poem doesn't speak to you, because let's face it- they don't all hit home, it's still fun trying to figure out what part of Disney Brad was using as his muse. To sum it up, this book is a must-own for any true Disney fan.