The awesome and the awful- interacting with NASCAR drivers

This past weekend we attended three days of racing at Pocono Raceway for the GoBowling.com 400. Thanks to the people at the track, we had some amazing opportunities that gave us the chance to interact with many of the drivers.

(OK- quick side note here... If you are NASCAR fan and don't follow Pocono Raceway on Twitter, what is wrong with you??? They do lots of awesome giveaways and have what I think of as the best social media team in NASCAR. Follow them here!!!)

Friday morning, Matthew and I ended up by the Media Center as some drivers were going in and out for media questions. The first driver we saw was Ryan Newman. I hate to say it (actually, no I don't), but Newman was a jerk. As he got off his golf cart, he started signing autographs for fans. Matthew was standing there waiting his turn patiently hoping Newman would sign his hero card. Ryan Newman looked right at him, saw he was holding the card, and turned and walked away to another group to sign more autographs. Yes, Matthew was wearing his Kyle Busch hat, but still... He's a kid and a fan. That was a crappy move in my book. Matthew came back over to where I was standing by the rails and the nice guy next to us who had also seen what happened, called out to Newman's PR guy and pointed out Matthew and said he wanted an autograph. (I also took off his Kyle hat at this point too...) The PR guy did make sure Newman signed Matthew's card, but I was shocked it had to come to that. 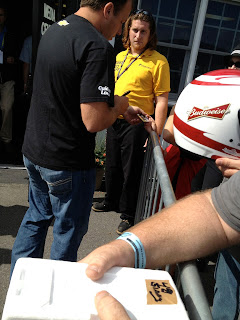 The next driver that came out was Jeff Burton. He signed for all the fans that were there waiting. When he got to Matthew, he not only signed the card, but he took the time to ask Matthew his name and chat with him for a few minutes. Jeff Burton is a total class act, through and through. 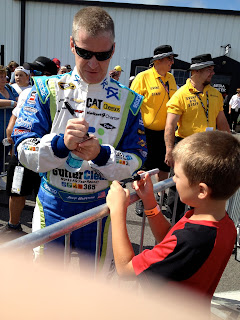 Then, much to the excitement of pretty much everyone, Jimmie Johnson came up on a golf cart to go into the Media Center. He didn't sign anything or even walk over by the fans on his way in, but he did say he would be back. Now, if you know me, you know I am NOT a JJ fan, but Matthew has decided he's his second favorite driver... So we waited. When he came back out, it was like a magnet attracting iron fillings- he had an instantaneous crowd of autograph seekers around him. Matthew was one of the kids right up in front by JJ while I stayed out of the mess of people. Jimmie made sure all the kids in the front got autographs before he moved on to the adults. You still won't find me rooting for JJ on Sunday, but I will admit that he is a nice guy and did right by all the kids there. 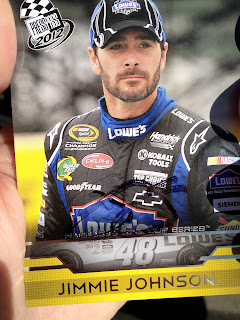 On Sunday, we were in position to have every single driver- yep, all 43 of them- walk by us on their way to driver introductions. The first driver that came through was Dale Jr. Apparently he was going through for a special presentation. On his way to the stage, he didn't sign any autographs. On his way back, he only signed one- a serviceman (National Guard, I think) had his uniform hat for him to sign. Jr stopped and signed that hat. The serviceman was ecstatic beyond belief after that. That was a nice move by Jr.

The drivers started coming through for their intros. The first few drivers just walked straight through and didn't stop, but none of them were rude or anything. Then more of the "bigger name" drivers started coming through and were standing around talking waiting for their name. The first one was Danica. One of the fans (they were only about 20 of us total waiting there) asked her for an autograph and she said "No." She then proceeded to turn her back to the fans and talk to other drivers, completely ignoring the fans. 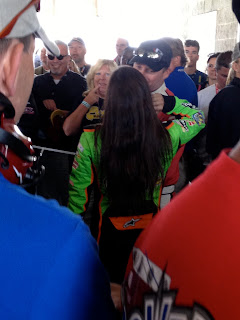 This is how she stood the whole time

This is why I don't like Danica... That was rude and uncalled for- she had no reason not to take the time to sign a few autographs. She isn't better than anyone else, despite what she thinks.
I'm ok with drivers not signing if they didn't have the time or had their kids with them, but she was just a bitch.

A few drivers came through with their kids, such as David Reutimann and Marcos Ambrose. They didn't stop and sign anything, which is understandable. Matt Kenseth was waiting about 5 minutes before his name was called, but he had his young daughter with him, and stayed over by a wall and kept to himself. Again, very understandable. 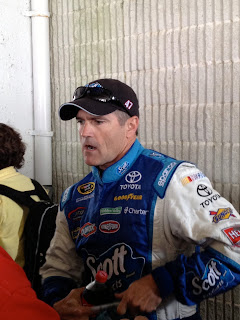 He asked Clint Bowyer, who looked at him like he was crazy and said "Your shirt?", but then signed away. 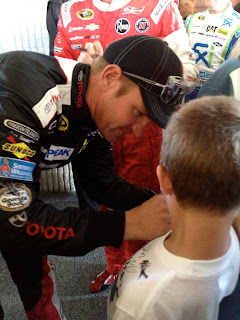 He also got autographs from Kevin Harvick, AJ Allmendinger, Travis Kvapil, Mark Martin, and Dale Jr (who did take the time to sign for more fans when he came through a second time). 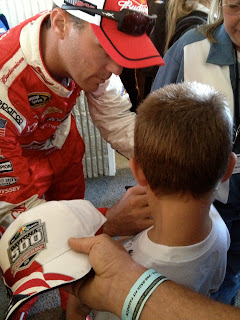 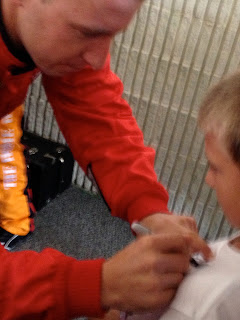 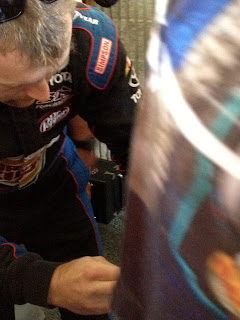 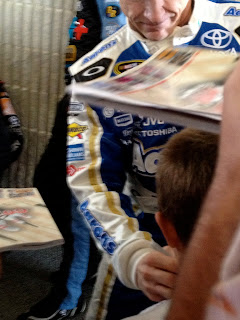 Now, Matthew's favorite driver is Kyle Busch. All I heard for three days was how he had hoped to Kyle's autograph. Kyle came up for his intros and Matthew started immediately asking him if he would sign his shirt. What happened next is classic Kyle Busch. He stopped, put on his sunglasses (keep in mind, we were INSIDE!!!), and found a place on the sleeve of the shirt not close to where anyone else signed. 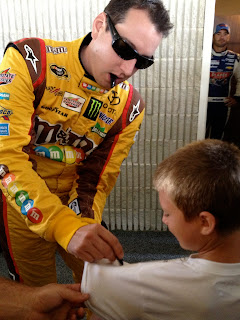 Kyle Busch- and his sunglasses- signing the shirt

But- he signed the shirt. Matthew was sooooo excited he couldn't stop bouncing. I'm not a Kyle Busch fan on the track, but that was definitely a nice move by him. 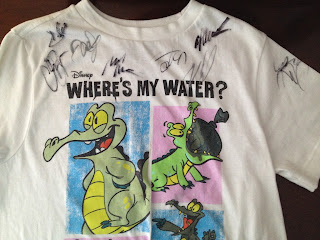 The shirt with all the autographs

Overall, NASCAR has some of the best drivers who really understand, more than any other sport, fans are the reason they are here and that fans are such an important part of the sport.
Posted by Jennifer at 9:41 AM

Well-behaved women rarely make history ~ Eleanor Roosevelt
Promise me you'll always remember: You're braver than you believe, and stronger than you seem, and smarter than you think ~ AA Milne
What's meant to be will always find a way ~ Trisha Yearwood