Space Mountain. A ride that all Disney fans know, but few have seen in the light. As I recently discovered, you really don't want to see this ride in the light- especially from the top of the ride!

One night at the Social Media Moms conference, a friend and I decided to skip the Joe Jonas and Demi Lovato concert and dash over to the Magic Kingdom to ride Space Mountain a few times before the park closed.
We were minding our own business, riding the ride, screaming away, when all of the sudden the car came to a complete stop. Ok- I've been on stopped rides before and know it's no big deal. But, this ride is in the dark. You have to hope and assume that all the other cars have stopped. And it didn't help that the track was vibrating every so often- like cars were still running. Slight panic setting in...
After about 5 minutes, the lights came on. Of course, the first thing you want to do is look around. BAD IDEA! There was only one track higher than we were. We were almost at the top of Space Mountain. To the left side was a drop about 30 feet to a platform- which was about 40 feet. To the right side was a walkway that ended at the beginning of my train car and became a set of stairs. As I was looking around the inside of the ride, what struck me most was how gray everything was- the tracks, the rails, the stairs, the ground (far, far away)... I also never knew that there is an elevator in the middle of the ride to the top of the tracks. 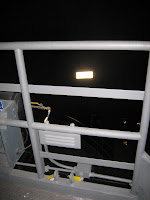 Several cast members made their way to all the cars on the ride and let all the people off- except for my friend and myself. Why- well, because of those stairs, we would have a large step down, which they wouldn't let us do. It wouldn't look good if we fell trying to get off... So, after several minutes, it was decided they would call the Fire Department to come get us off the ride. And yes, I am serious. While we were waiting, we both got our cameras out and started taking pictures. Unfortunately, it still wasn't light enough for my camera to take great pictures.
When the Fire Department arrived, we were both slightly disappointed- we had asked for cute firefighters and Disney didn't deliver. Oh well. In a somewhat anticlimatic rescue, we slipped a strap under our arms and, uneventfully, climbed out of the car. We walked ALL the way down the many, many steps and left the ride. 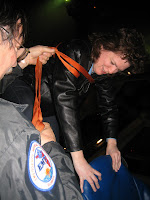 The best part of the evening- other than just getting off the ride- was being able to walk out of the Magic Kingdom a half-hour after closing. It was great to see Cinderella's Castle and Main Street without the throngs of people that are normally there. That being said, however, that wasn't an experience I wish to repeat.
Oh- and if I ever retell this story, don't be surprised if all of the sudden the fireman are hunks and they had to bring in the hook and ladder to get us down. A story always gets better with retelling :)
Posted by Jennifer at 8:54 PM